A solver is a program that finds a solution for a Sokoban level.

An optimizer is a program that finds a shorter solution on the basis of a given solution.

Probably the oldest solver is Rolling Stone, developed at University of Alberta, Canada, Department of Computing Science by Andreas Junghanns and Jonathan Schaeffer.

Other noticeable solvers has been developed by Joris Witt and David White. And the now discontinued webpages of Paul Voyer and Adolfo Ovalle contained online Java Sokoban solvers.

One more solver to mention is the solver developed by Ben Dogan for his Sokoban level design competition spring 2015. This solver is not available.

A simple solver was developed 2008 by Pavel Klavik from The Czech Republic. Pavel is probably more known as author of the Sokoban program Armageddon.

Today you probably only want to use the following three solvers:

You will find a comprehensive test comparing the different solvers at Sokobano.de icon-star . The solvers tested was the last three mentioned and Boxsearch by Ge Yong. The website for Boxsearch is long gone and only found in The Internet Archive.

The solvertest was last updated 2013 and both JSoko and YASS are improved considerably since then.

You will find two optimizers: Again from Matthias Megers JSoko and YASO(Yet Another Sokoban Optimizer) from Brian Damgaard.

Which solver and which optimizer are the best?

I decided to make a small test with the solvers YASS, Takaken and JSoko and with the optimizers YASO and JSoko.

First I solved the 10 levels in my collection “Numbers” with each solver. None of the solvers found a solution for “Four”. And all the solvers found solutions for the rest of the levels. Mostly within less than two minutes. JSoko took some time to solve “Seven” and “Eight”, but the job was done in due time. YASS had similar problems with “Zero”.

Then I let the optimizers try to find shorter solutions on the basis of the solutions found by the three solvers.

Results for the YASO optimizer:

Results for the JSoko optimizer:

I used standard settings except for setting solving timeout to one hour. It might be possible to obtain better results with other settings.

Looking a little closer you will find the average results moves/pushes don’t differ very much. But not always. One remarkable difference is how YASO handles “Two”. 31 moves more with the YASS’ solution than the Takaken and JSoko solutions? Actually the basic solutions before optimization are quite different. YASS found a solution where the bottom of the level is solved first. Takaken and JSoco found a solution where the top of the level is solved first. In this case, as probably in most cases, the optimizer doesn’t find a new solution but optimizes the first found solution.

Didn’t check it out but in “Five” YASO obviously found the same optimization whatever the provided solution at first. And JSoko just as obivously didn’t do that.

All my basic solutions and optimizations can be downloaded here if you want a closer look.

I wanted to know if the latest versions of YASS and JSoko have improved from the Sokobano test 3 years ago. They have. Both solve several more levels. I just tested the results for XSokoban (The EASY Extended Original Collection).

Why EASY ? Well, the small changes made in level 37 and level 50 makes these levels easier solvable both to humans and solvers.

Three differences that complicate matter. But what is important ?

Actually I tried changing the differences one by one in every possible combination (Eight including the XSokoban layout).

Something interesting about a prequel to the final “Four: 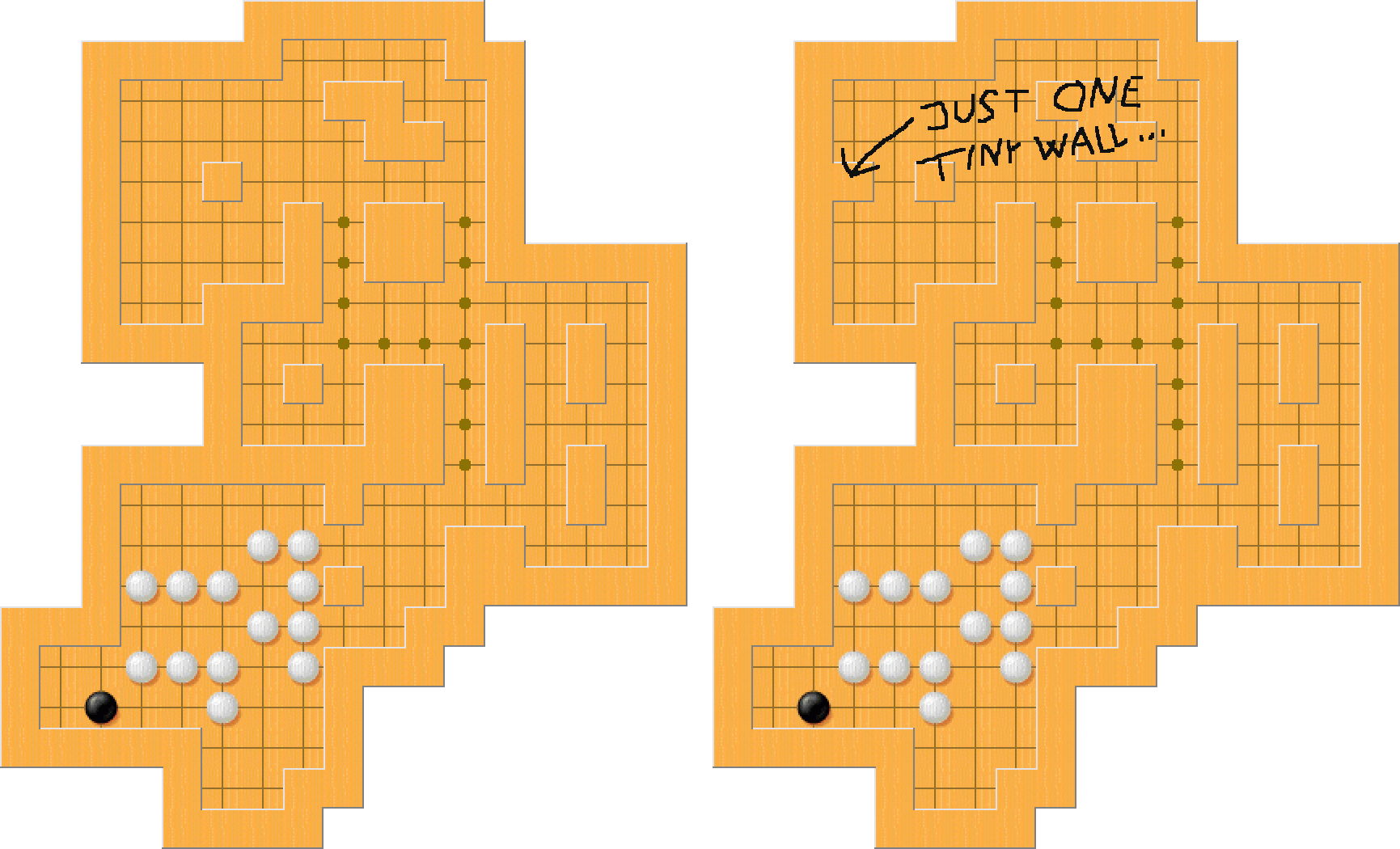 None of the solvers found a solution for the published “Four”. A human (me) hadn’t the slightest difficulty to go from the old layout to the new. 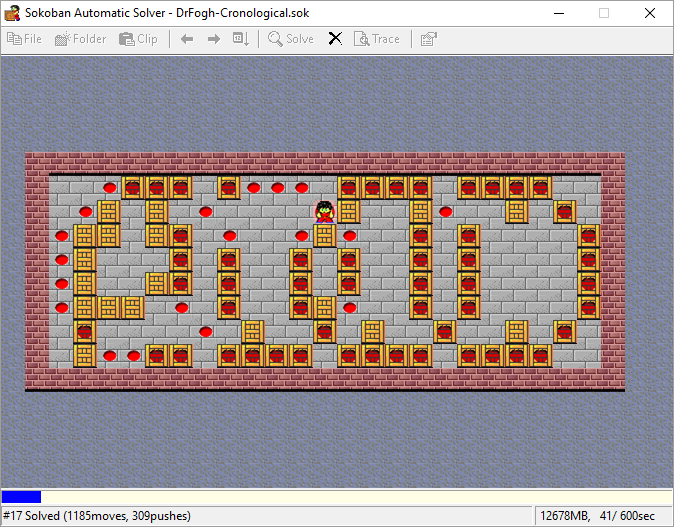 Neither YASS or JSoko solved this old level of mine. Takaken needed 41 seconds.

Had to try another one of the same sort: A rather big not very complex level for humans but how about Sokoban solvers: 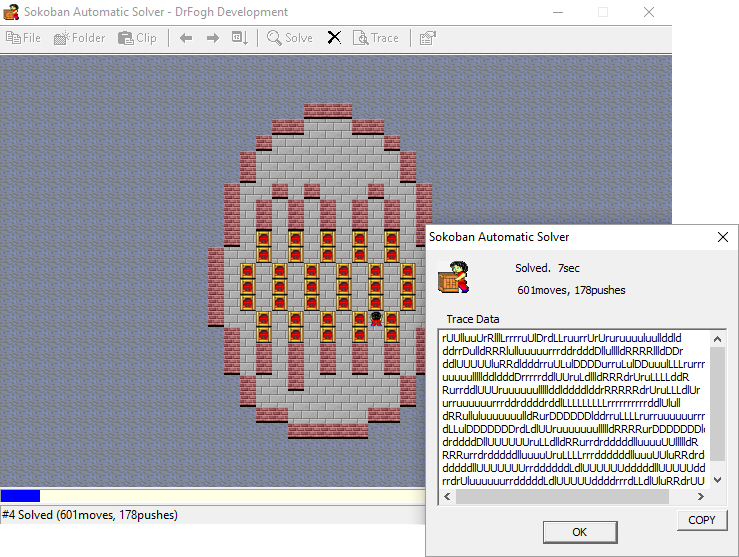 Today the solvers perform better but how much?

Back in the 90’es solving of the “extended XSokoban original” was the golden standard. And Rolling Stone was king of the solvers. As far as I know.

The list is updated wit the results for YASS (2.136) and JSoko (1.72). Compared to the results at Sokobano.de both YASS and JSoko find more solutions. Marked with red. Still no solver cracks Screen.29

Which solver and which optimizer are the best ?

The solvers you want to use are YASS, Takaken and JSoko.

And both YASO and JSoko optimizers.

If you don’t use all the tools you can’t always be sure you have got the optimal solution for a level. The solvers might find a solution, but not necessarily the best. And the optimizers usually only improve known solutions. They don’t find new solutions.

Where to get the solvers and optimizers

icon-external-link Takaken – Website still works even if there has been no update since 2008. icon-star

icon-external-link Rolling Stone – For the ones with a Unix/Linux computer and historical interest.

Digging deep into the files of Kohns Sokoban2 I rediscovered the original graphics and remade the skin with seamless bamboo walls, goals looking more like real Go and a little animation of course. Find the skin in common skin format here. icon-star