The first time I discovered a remake of one of my levels was this:

When I made the level I completely overlooked the passageway top right was unnecessary.
A remake I like. Adding quality to my level. Or removing mediocrity. You choose 🙂

In the following you could read some raving about normalizing of my levels McDonalds and Pound republishing them as remodels just normalizing them.

I have a nagging feeling this wasn’t right at all.

Differing from books you can easily change internet pages 🙂

I didn’t keep the changed levels, but Pound probably was changed someway as shown above.

The original level obviously can contain more boxes inside the same frame.

One author published the sharpened version 2.

A second author added a floor and a switchbox as marked in version 3. Making it a remodel and not just a sharpened version.

A fourth author made version 6. A true sharpened level reducing the original frame with two floors. Increasing the boxes to the maximum. And with a connected goal and no boxes already in the goal area.
Arguably the best version so far 🙂 . But do the Sokoban World really need one more version of this level?

By sheer chance I discovered this: 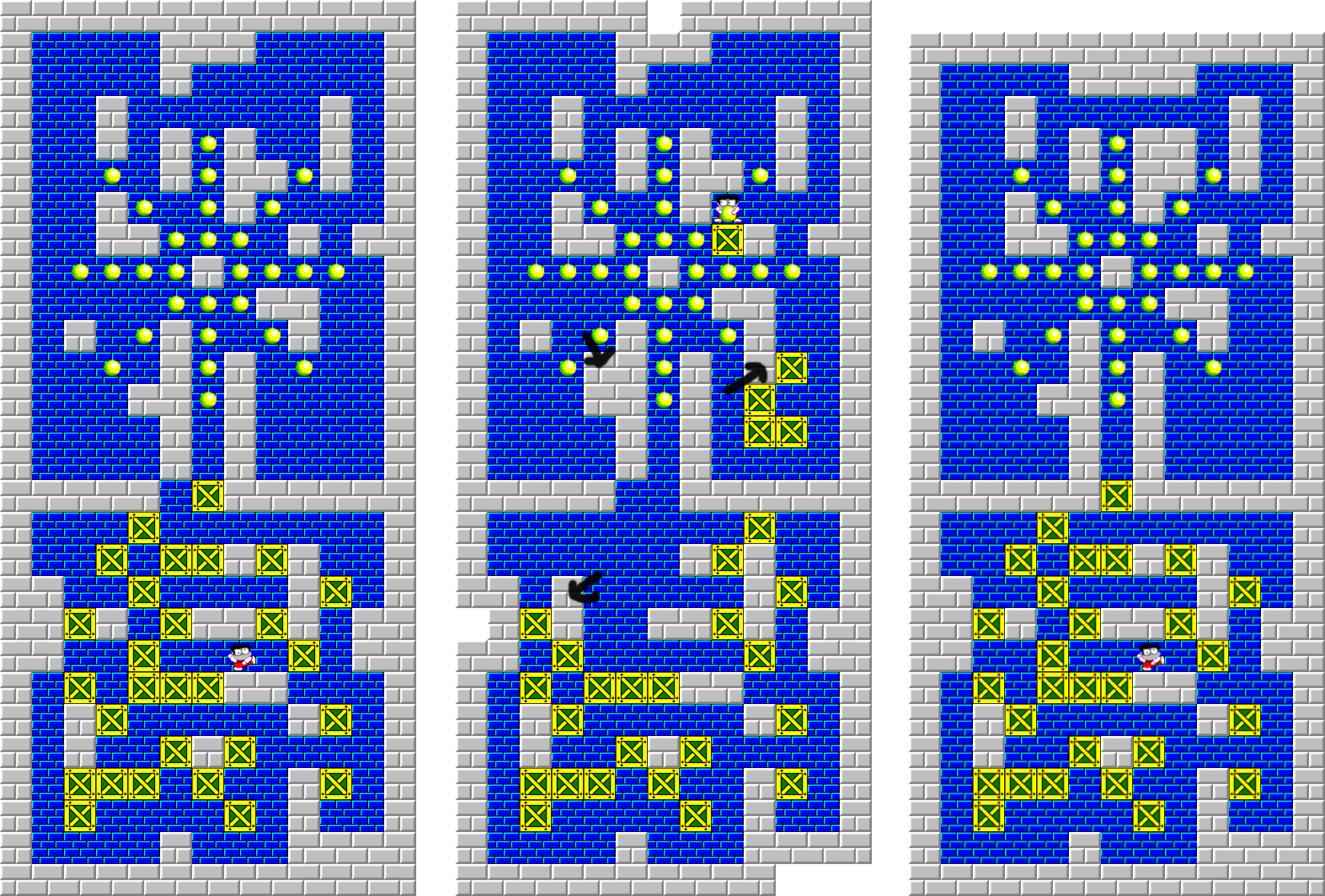 A remake was published with several authors wrongly quoted as coeditors.  With the marked changes of the walls. Changes without any obvious purpose. The layout of the sun is ruined. And with some of the boxes already through the pinhole making the level weaker. Maybe that was the purpose but certainly not one I can approve on.

I asked the author to remove the level and so he did.

By the way I discovered the original level was a little loose and remade it myself shown at the right. Find it in my collection Original03 (Not yet published).

A sin of my own follows:

The basic layout got something but needed some remaking. I reduced the floor, made a small change in the central layout and published the level on the left at SokobanOnline.
Looking at the level a few days it became obvious a row at the left didn’t add anything interesting to the level so I removed it.

I think you will find the final level in Original03.

The original level really craved for a remake but as an afterthought I don’t think I should publish the level so shortly after the original. No need to embarrass anybody.

And the last incident: 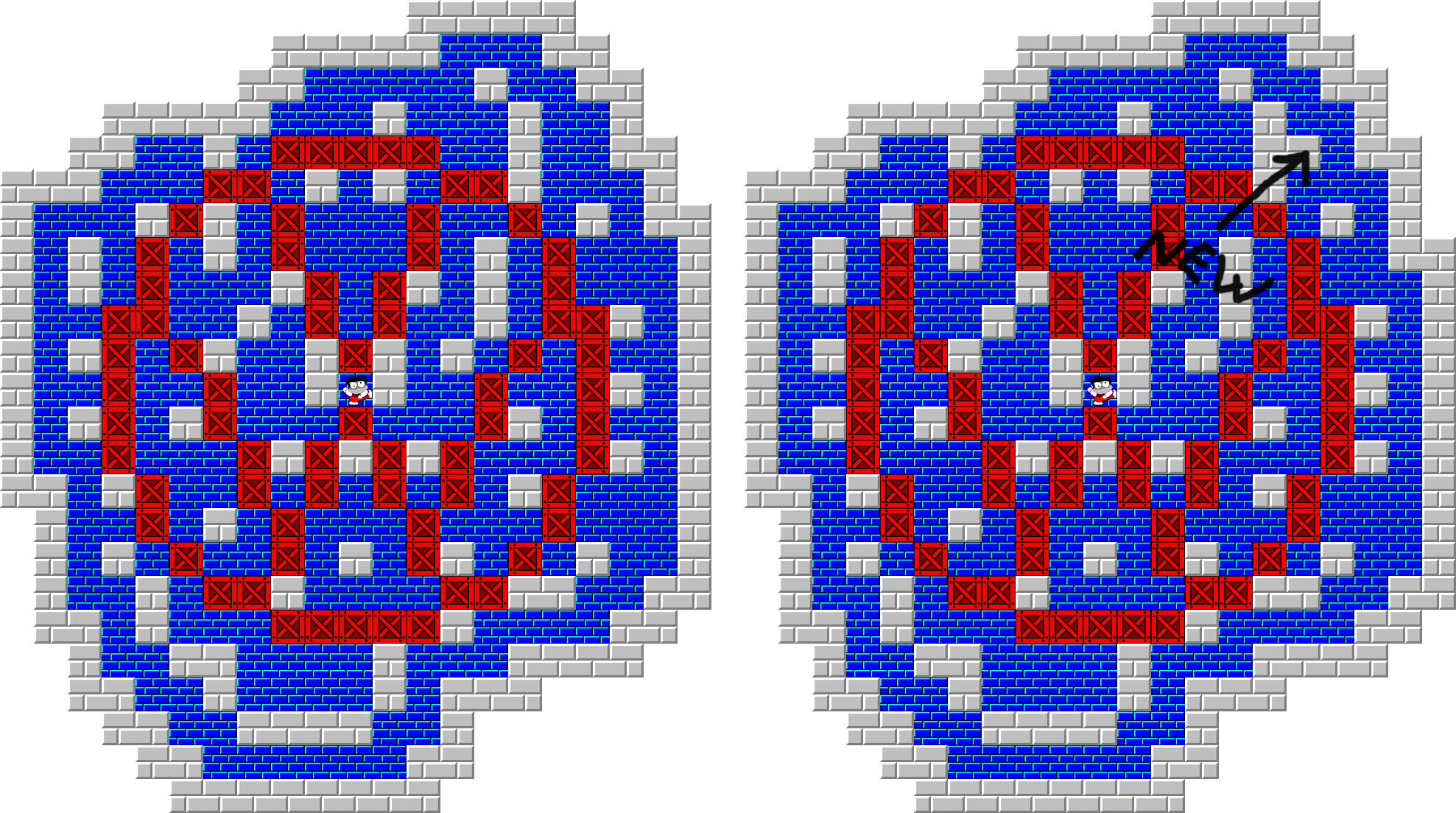 A remake was published less than 24 hours after I published Original02 at LetsLogic.

And I don’t like the change of the title to some gibberish. Now there is no reference to the original level. Even if the original author is quoted correctly it now appears the level is a cowork and not a sharpened version of somebody elses work. 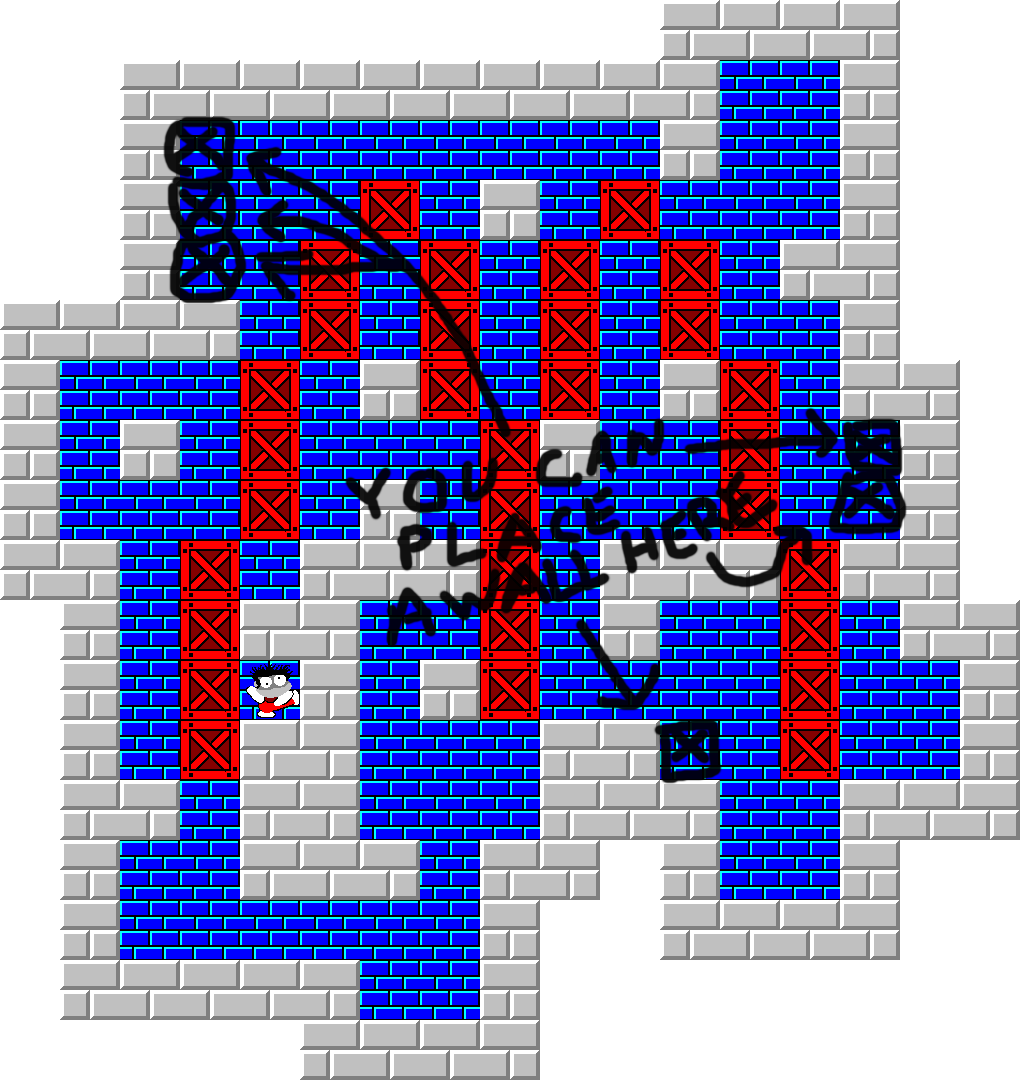 McDonalds apparently is a popular level since a remade version also was published less than 24 hours after i published Original02 at LetsLogic.

Walls were placed as shown.
This is an improvement I like and would heartily have approved.

What is bad and what I will not show here is that the level has been flipped vertically and renamed to some gibberish. Flipping and renaming serves no purpose. Again there is no reference to the original level. And again even if the original author is quoted correctly it appears the level is a cowork and not a sharpened version of somebody elses work.

Get inspired by others work. Don’t make a joke of it.

There are so much else you can do in Sokoban so it shouldn’t be hard to follow a single recommandation:

Don’t publish changed levels if the author states he doesn’t want this.